If you have bleeding gums, it’s an early sign of gum disease. Gum disease is a serious condition that can lead to tooth loss if left untreated. It’s important to catch the problem before it gets worse.

Get back on track for healthy teeth and gums!

Do Your Gums Bleed During and After Brushing?

Periodontics focuses on the inflammatory disease that damages the gums and other supporting structures around the teeth. Dr. McOmie is an expert in the latest techniques for the prevention, diagnosis, and treatment of periodontal disease and the placing of dental implants.

We treat cases ranging from mild gingivitis to more severe periodontitis. We offer a wide variety of treatments, such as root planing and scaling (cleaning the infected root exteriors), root surface debridement (the removal of damaged tissue), and regenerative procedures (the reversal of lost bone and tissue), and surgical procedures for patients with severe gum disease. Additionally, Dr. McOmie is well trained in the installation, maintenance, and repair of dental implants.

During the early stage of gingivitis, bacteria in plaque build-up, causing the gums to become irritated and inflamed and will bleed during normal tooth brushing. Although the gums may be irritated, the teeth are still solidly planted in their sockets. No irreversible bone or tissue damage is present.

When gingivitis is left untreated, it can advance to periodontitis and ultimately to tooth loss. Periodontitis causes the inner layer of the gum and bone to pull away from the teeth and form periodontal pockets. When debris gets trapped in the spaces between teeth and gums, it can cause infection. The body’s immune system tries to fight off the bacteria as the plaque spreads and grows below the gum line.

What Are The Signs of Periodontal Disease? 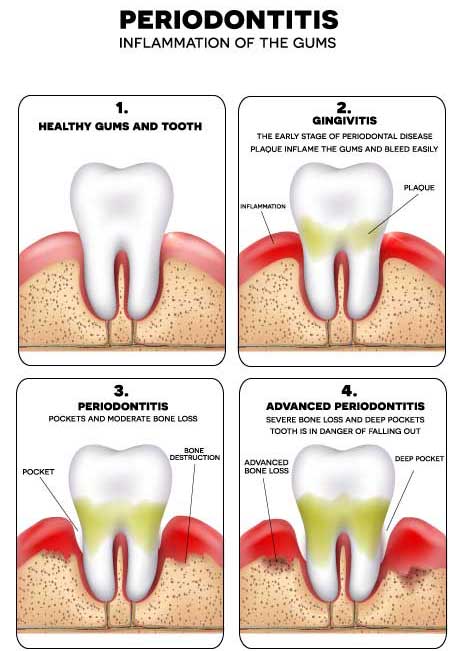 Dr. McOmie will examine the gums, check to see if there is any gum line recession, evaluate how the teeth fit together when biting, and checks for any loose teeth. We also take a small measuring instrument called a probe and place it between the teeth and gums to determine the depth of those spaces, known as periodontal pockets; this helps to assess the health of your gums. We may also take X-rays to view the health of the bone below the gum line.

Even if symptoms are not present, you may still have some degree of gum disease. Sometimes gum disease may affect only certain teeth, such as the molars. Dr. McOmie can recognize and determine the progression of gum disease and recommend the proper treatment.

Fix Your Gum Disease Before It Gets Worse!

Bleeding gums are a sign of periodontal disease. If left untreated, this can lead to tooth loss and other health problems. Call us today at (423) 899-1112

Our Promise To You

Why Choose McOmie Family Dentistry for Your Periodontal Needs

Dr. McOmie is an expert in the latest techniques for preventing, diagnosing, and treating periodontal disease. Dr. McOmie has helped thousands of patients with periodontal issues get back on track for healthy teeth and gums! He offers a variety of treatment options, including non-invasive procedures like scaling & root planing (deep cleaning) and surgical treatments if needed.

What Our Patients Say

There is a reason we are highly rated and trusted by our patients on Google, Facebook and Yelp.
